With weather this summer not unlike what you’d find in the tropics, we’re celebrating the season with fiesta-inspired foods. Co-op’s summer fiesta is an excuse to break out of the ordinary and have a little fun with dinner.

This week’s fiesta pick is a meal you can make easily on a hot night and it uses up leftovers too.

Make your own BBQ fiesta!

Pick a day during the week and barbecue a whole chicken or two, or pick up some fresh chicken breasts and grill a few extras. That becomes your meal that night, but you’ll want a bit left over for this next dish; BBQ chicken nachos on a cedar plank.

To prepare BBQ chicken nachos, you’ll need a cedar planks which you can get at BBQ supply stores, or larger grocery stores (often in the meat department).  Buy the largest one you can find, or consider using smaller ones for individual size portions.

You’ll need to soak the cedar plank in water for an hour or two before you use it.  Soaking keeps the plank from scorching (or catching fire!) and prolongs its life.

Fill up the sink with a couple inches of water and put some large heavy cans on top to weigh it down, or sit a heavy pot on top. 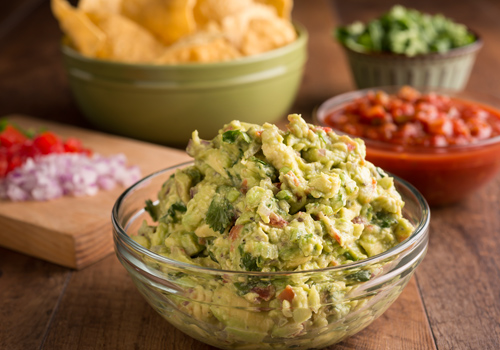 While the plank soaks, prep your BBQ chicken nacho toppings.

Shred leftover chicken from your earlier meal and set it aside. If you skipped the barbecuing-your-own-chicken step, you can either put some chicken breasts into the oven and bake them, sauté some ground chicken in spices, or pick up a Co-op deli roast chicken.

For the nachos make sure you have on hand:

Preheat your BBQ to about 300 degrees for this recipe and use indirect heat to bake the nachos so they don’t get scorched.

Now repeat the process so you have a second layer. This ensures deliciousness in every bite.

Set your plank directly on the hot grill and close the lid. Cook for about 5-7 minutes or until the cheese is melted and just a bit bubbly.

Serve the cedar planked BBQ nachos by placing the hot plank on a serving platter so you don’t get soot everywhere.

Grilling leftover BBQ chicken nachos on a cedar plank outdoors means you don't need to heat up the kitchen on a hot night, plus it’s a great way to use up leftover chicken and other veggies you may have in the fridge.

Back To School Meal Ideas

Back to school is a mixed blessing for parents. On one hand, it brings some much-needed peace and quiet to the house, but on the...

Back to School Lunch Ideas

Planning school lunches can be a daunting task. Parents worry a lot about nutrition and ensuring their kids have enough to eat, yet there’s a...