BBQ season is just around the corner and now is the perfect time to start thinking about what you’ll be grilling on those long-awaited evenings. This year, as well as the classic burgers and steaks, why not try kabobs? Popular in the Mediterranean and across the Middle East, these sumptuous skewers are ideal for grilling over some hot coals. You can make your own easily, or hit up your local Calgary Co-op store for ready-to-cook chicken and vegetable kabobs that will put dinner on the table fast.

History of the Kabob

Kebab, kabob, kebap and shish kebab. In North America, we tend to call it ‘kabob’ but the names all refer to the same thing: small pieces of meat or vegetables cooked on a wooden skewer on a grill over a fire. The name ‘kabob’ comes from the Turkish şiş kebap or shish kebab, where ‘şiş’ is the word for skewer while ‘kebap’ comes from the word for grilling.

Many believe that the idea of skewering small pieces of meat before grilling them over a flame originated in Iran, where the term ‘shish kebab’ has been used since the Middle Ages. Persians would eat them alongside a glass of wine. Plus, in a region with fewer trees than average, small bits of meat meant less wood to burn for the fire.

The Turks brought the kebab to Greece where it transformed into the kabob we are most familiar with today: small chunks of meat alternating with chunks of peppers, onion, squash like zucchini and tomato. Although in Greece the most common type of meat was lamb, in North America we normally choose beef or chicken and use larger chunks of meat. Perhaps we can learn something from the Persians, as using smaller morsels makes grilling kabobs a lot easier: less turning and a faster grill time.

We find variations on the original kebab all over the world as it spread along with the Turks, Persians and Greeks. In Georgia, the kabob became the ‘shashlik’ and this spread into the Soviet countries as well as across India and Pakistan. Other countries that have adopted the kebab idea are Indonesia, where it’s called satay and consists of chicken on a skewer served with a tangy peanut sauce. In Nigeria suya consists of long pieces of beef or lamb grilled on a stick, and in Japan meat or vegetables on a skewer is known as yakitori.

How to make a chicken kabob

Making kabob is as simple as cutting chunks of meat or vegetables and even fruit and threading it onto a stick and you can use either disposable wooden ones or the reusable metal variety. While lots of folks like to use breast meat, we actually prefer chicken thighs because it tends to stay moister.

When it comes to veggies, you can use whatever you like but it’s best to use something that can hold up against the flames of the grill. Try red or white onions, sliced cobs of corn, potato, peppers or zucchini.

No time to prep the meat, soak skewers and marinate? Calgary Co-op has created ready-for-the-grill chicken and veggie kabobs that can go from cart to BBQ in no time.

The great thing about kabobs is that they’re pretty versatile. Once you’ve got the basics down, it’s time to get creative. Spreading a marinade over the kabob just before you pull it from the grill will give it a big flavour boost and help you get that nice charring on the meat. You can also whip up a tasty marinade of soy sauce, sesame oil, honey and ginger for a delicious Asian flavour. Our Sweet Chili Glazed Chicken and Veggie Kabobs are a hot and sweet dinnertime treat.

Riffing off the Indonesian theme, these Grilled Chicken Kabobs with Satay Peanut Sauce and Carrot & Cucumber Salad is a tasty and healthy meal you’ll want to make extras of, since it makes a dynamite lunch the next day.

If you want a crowd-pleasing option that your teenaged kids will love, these Buffalo Marinated Chicken Kabobs are sure to be a hit.

With its rich history and so many variations across the globe, kabob is a dish loved by people the world over. It couldn’t be easier to make and presents so many opportunities to get creative with flavour combinations, so why not shake up your BBQ this summer by preparing some yummy kabobs! 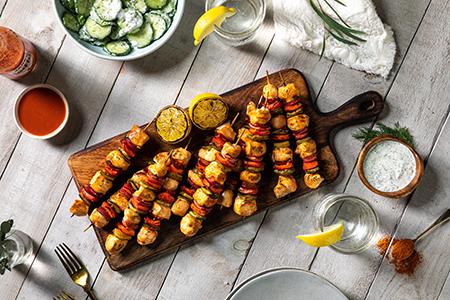 3. Bring to a simmer and cook for about 5 minutes to combine. Remove from heat and let cool.

5. Toss the kabobs with the hot sauce and then grill. Cook until chicken reaches an internal temperature of 165°F.

6. Serve kabobs with ranch dressing and a green salad.

As summer turns to fall, our culinary thoughts move from hamburgers, fresh garden salads, and steaks on the grill to hearty, warm foods that can...

There’s no question that the king of the summer grill is pork back ribs.

Ready to bring your summer dinner party offerings to a new level? It’s time for kabob night! This flavourful meal is versatile, easy to prepare,...

Back to Top
Calgary Co-op Learn Make It Tonight: Chicken Kabobs
Back to Top