with a Little Help from a Local Favourite

We all know kids are picky so it can be hard to come up with daily lunches they’ll eat. Lunch making is a big burden for many parents, but it doesn’t have to be complicated.

While many of us will pack sandwiches as the main portion of the meal, you can keep things interesting by swapping out the basic white bread. Middle eastern or Mediterranean breads such as pita, balady, and naan, as well as tortilla wraps, can be used to create sandwiches and or bento boxes that are customizable, fun and a little bit different to get the kids excited about eating their healthy lunch.

Calgary bakery Byblos has also just launched a new bread exclusive to Calgary Co-op called Byblos Mediterranean Flatbread. This new style of bread could be called a hybrid between pita bread, pizza crust, tortilla wraps, and naan. Mediterranean Flatbread has no interior pocket like pita, it’s flat like a pizza crust or flatbread, but thinner. It’s thicker than tortilla wraps, and, like naan, it’s ultra-pliable. 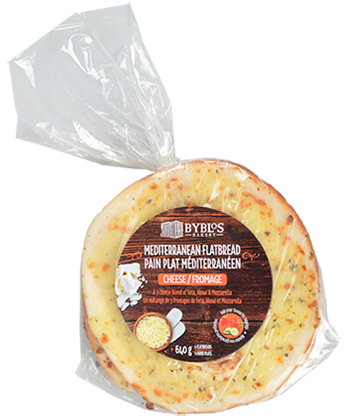 This brand new product hit the shelves in July 2019, and is ideal for wrapping sandwiches, cutting into triangles and serving with dip, using as a base for a unique pizza, or using to sop up saucy meals. Byblos Mediterranean Flatbread is the chameleon of lunch time breads!

“Byblos Mediterranean Flatbreads are a great tasting opportunity for families to experience the unique taste and aromatic flavors of the Mediterranean,” says Paul Miglierina, National Key Account Manager at Byblos. “Simply warm them in the oven for 5 minutes, and add your favorite toppings for a quick and easy meal.”

Looking for more ideas to use different types of bread in lunches? Read on. And keep in mind you can use the new flatbread in almost any of these ideas below too.

Egg Salad Naan Sandwich
Egg salad sandwiches are protein-packed and easy to make in the morning and send with the kids. Next time, choose Byblos naan bread. Baked here in Calgary, Byblos has been making breads since 1975.

When you’re making the egg salad, consider changing up the basic hard-boiled egg and mayonnaise combo by adding few pinches of cumin, salt, pepper, coriander, curry powder or even wasabi paste to give it a new flavour. You could also mix in cilantro, green onion or even crumbled bacon bits too.

Balady Bread Chicken Strip Sandwich
We all know that chicken strips are a solid choice for kids, and what’s better than making them into a special sandwich?

If you’ve never tried it, Byblos Bakery balady bread is excellent for making sandwiches, as it is thinner than pita but maintains the same deliciousness with a delightful chewiness.

Similar to pita bread in that it will bake up to form a pocket, balady is softer, it's rolled much thinner, and as a result the final product is much more pliable for rolling or folding. Thanks to its extreme flexibility, it's often used for falafel or pita wraps.

To make this sandwich, you can make your ‘nugs’ from scratch or pick up a box of frozen ones and cook them up, then let them cool. Open up the bread to form a nice pocket, and then pack in a few chicken strips along with some tomatoes, cucumbers, sliced onions, olives, mayo, mustard or even the new Mayochup mayonnaise-ketchup condiment. This sandwich is best when heated a little, but if eaten the same day, these sandwiches can be eaten cold. 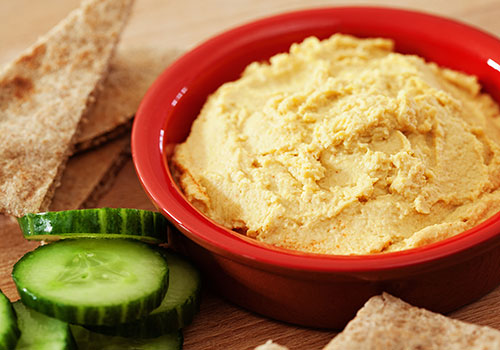 For this lunch option, roll the pita up or cut it into triangles and stash it in a reusable plastic container and let the kids tear off pieces for dipping. Portion out some hummus into smaller containers. Add mini containers of nuts such as pistachios or almonds, fruits like blueberries and strawberries, or veggie sticks like carrot, celery and peppers. This lunch box idea is perfectly customizable to what your kids like.

Naan Panini
Everyone likes paninis, and just like average sandwiches, these are extremely customizable. Most people, however, have never experienced how delicious a panini made with naan is.

Deli meats like ham, turkey, and bologna can be used along with the kids’ favorite cheese and other toppings they might like. Just layer the meats, cheeses, and other toppings in between two pieces of naan and press them in your panini press. That’s it! Naan paninis (also known as Naaninis) are quick to make and the kids will love them. These are great if reheating is available, or go old school and make them with peanut butter and jam or banana, and they can be eaten cold. 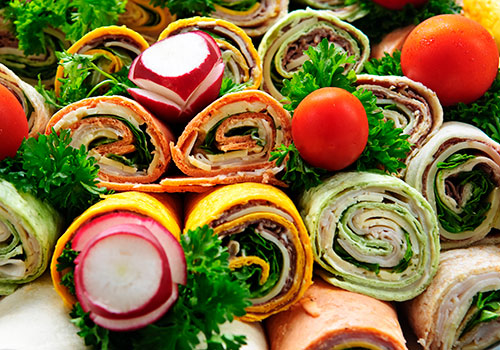 Turkey Pinwheels or Wraps
We’ve all seen those flatbread pinwheels at parties and social gatherings, but they can also be made for back-to-school lunches using tortilla wraps.

Small and compact, these wraps pack nicely into insulated lunchboxes and will keep the kids powering through their day. You can leave them as whole wraps or slice them into ‘sushi’ style rounds and stand them up on their ends.

Choose your tortilla wraps; if you’re serving them whole, you can leave them as is. If you want to make sliced rounds, trim the wrap into a square.

Mix up 3 tablespoons of cream cheese, 1 tablespoon of mayonnaise, 1 teaspoon of dill, and spread it on the wrap. Add some arugula or shredded lettuce, a thinly sliced or diced tomato, and slices of turkey and shredded cheese. Roll them up and pack these with some veggies and a treat, and lunch is served.

Banish white bread boredom! Middle Eastern and Mediterranean breads are an excellent choice for making lunch interesting, and with these locally made choices from Calgary’s Byblos Bakery, you know you’re getting fresh, tasty and healthy food for your family.

If you need to buy your mom a gift for Mother’s Day but most of the nice shops and cool stores are closed, take heart:...

Nothing says ‘holidays’ like the smell of fresh baking. Whether that’s banana bread, pumpkin pie or a batch of traditional sugar cookies just waiting to...

Whether or not pizza Fridays are a thing at your house, fresh pizza dough can be a lifesaver when it comes to getting dinner on...

Back to Top
Calgary Co-op Learn Byblos Bakery: Mediterranean Flatbread and More
Back to Top