Means They're Acclimatized and Hardier 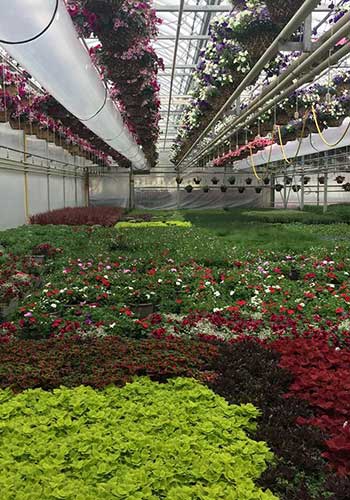 Tucked away in a rural area south of High River, Grozone’s sprawling greenhouse complex covers over 400,000 square feet. Walls of glass stretch in all directions, and shoot off from an L-shaped corridor. Inside this massive set of buildings are thousands of plants at all stages of development, and it's in this warm and tropical environment, many months ago, the fall flowers you're seeing arrive at Co-op, were planted and started to grow.

"Grozone starts these plants at the end of May. It takes approximately seven to eight weeks to get them ready for shipping," shares Daljit Bhashin, co-owner of Grozone Greenhouse Limited. "We supply garden mums and mixed fall planters which include pansies, dusty miller, miscellaneous grasses, and ornamental kale, along with other plants suitable for the Alberta Climate."

Bhashin co-owns Grozone, along with partners Linda and Harry Lively. The company has been supplying greenery to Co-op for over twenty years.

“Our relationship with Co-op is so important to us,” explains Robert Nipp, Grozone’s office manager. “Co-op has been a huge supporter of Grozone from the beginning and we’re grateful for their support and interest in our products.”

All the plants Grozone supplies are grown and tended under the transparent roofs here in Alberta, meaning they're local. In many cases Grozone plants leave the greenhouse at sunrise and can be enjoying a new home with a Co-op customer by lunch time. 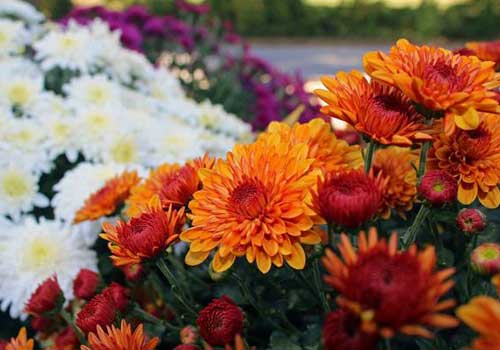 Mums are a major fall favourite, and while they may be the harbingers of colder weather to come, they themselves are extremely hardy and long lasting.

Says Bhashin, "Mums are very resilient and can take up to four degrees below zero in Alberta.  They can keep blooming until Halloween, depending upon the weather. Also, mums can survive into next year if you bring them indoors. It is advised that you put them into a bigger pot with new soil, and loosen the roots before transplanting them into that new container.  They should be set near a window so they receive sunlight."

Grozone's mums don’t require fertilizer or any extra special treatment, and insects are not typically a problem with mums either. Although they are hardy, Bhashin shares that it's wise to cover them with a light cotton sheet when the temperature may dip below four degrees.

Mums, as they're commonly known are actually chrysanthemums, and these flowers with their distinctive button centres and feathery, narrow petals can also come in fuller, more rounded shapes, and from sizes small to big.

Purchasing plants that are grown in Alberta, and very close to Calgary also has another advantage; the plants are already acclimated to our unique weather and climate. Some plants brought in from B.C. may have spent weeks in much warmer temps, and when exposed to southern Alberta's more extreme fluctuations, they can suffer. Alberta grown plants can be hardier, and thus healthier and longer lasting, a big bonus for local green thumbs.

"Mums grown at Grozone have a chance to adapt to our climate.  Also, they don’t endure the same shipping stress that they would from other zones that sell them.  For example, they are sometimes in transit for 48 hours from areas like B.C. causing the plant duress."

It takes a legion of plant experts to make this massive greenhouse operation sing. With a staff that can climb to 50 people, Grozone handles every aspect of the growing cycle, from seed to sprout to store. They also supply a huge variety of other plants to Co-op, including bedding plants, spring baskets, and more.

The rows of greenhouses are filled with a colourful riot of flowers and plants, and while some areas are sea of green, others are already in bloom, or just pushing  delicate baby leaves through their soil.

The scent is heavenly, and though most Calgarians will never know the unique and intricately crafted tropical world where some of Co-op’s spring plants start their lives, since this greenhouse is off limits to the public, we can take comfort in the fact that Grozone plants are grown to the highest standards.

With COVID restrictions and social distancing rules looking to last throughout the winter, there’s no doubt that this New Year’s Eve is set to be...

Deck the House for the Holidays

The days are getting shorter, the winds are getting colder; winter is officially on its way! Now is a great time to start preparing for...

The months of May and June are an exciting time that often marks a major milestone in a lot of young people’s lives: graduation.