Our customers should expect a delicate, creamy and nutty taste that’s like no other cheese.

Whether it’s melted on burgers, mixed into macaroni or fanned out on a charcuterie board, cheese is always a treat. But have you ever looked into where your cheese comes from? You know, before it arrives at the Co-op Deli department? What if we told you one special cheese starts its life in a deep, dark, natural cave—in Switzerland?

Kaltbach cheeses are available at Calgary Co-op, and they’re imported from Europe where they take a very unique path to your table. 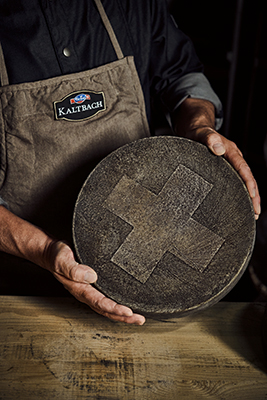 “Experienced specialists select the cheeses and only the best make it into the Kaltbach cave,” explains Roland Ziswiler, who leads operations at Kaltbach Cheeses. “These cheeses are matured and cared for for different lengths of time. They are sold at the optimum degree of cave ageing. Kaltbach cheese gets its unmistakable taste from maturing in the special, natural climatic conditions of the cave.”

In case you’re wondering if this is a marketing gimmick, it’s not. Kilometers of subterranean passageways run below this region, creating a naturally cool and damp storage system—perfect for aging cheese.

Cheesemakers started experimenting with storing their cheeses in these caves in about the 1950’s, and initially used just about 20 metres of cave passageways. When the cheeses stored there started to become popular, the cave was expanded in several stages and has since grown to more passages with a total length of 2400 metres, or over two kilometers.

“The cave is made of natural sandstone, which has the property of storing water,” says Ziswiler. “This guarantees us optimal humidity and a constant cave temperature throughout the year, regardless of the weather. These are perfect conditions.”

Experts in this region theorize that a drop of rain falling from the sky takes two years to reach the cave. Ziswiler doubts anyone can really be that precise, but the Kaltbach team says the layers of very porous sandstone are able to keep conditions in the cave constant all year round: at 96% humidity and a temperature of 12.5°C, the perfect environment in which to store and age wheels of cheese weighing up to 100 kilograms, for up to nine months at a time. 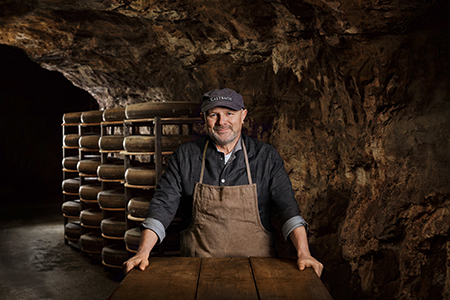 While they mature, Kaltbach’s ‘cave masters’ monitor the cheeses. Ziswiler says when you walk into the caves “there is a fine smell of cheese in the air. Experienced sniffers can tell from the smell which types of cheese are stored where.”

Ziswiler himself has been making cheese for over 35 years. He started with an apprenticeship as a cheesemaker and continued to learn, working for different companies, and with different types of cheese. Now four years into overseeing operations at Kaltbach’s caves and cheese making operation, Ziswiler says he still gets excited about going to work each day.

“Producing a natural product and selecting top cheeses for cave aging gives me a lot of pleasure. This requires expertise and craftsmanship. It takes a lot of experience and we are always challenged to combine the traditional with new technologies.”

Calgary Co-op carries the Kaltbach Gruyere, which is perfect for melting onto sandwiches, stirring into sauces, or for enjoying on its own. Ziswiler says customers should expect a delicate, creamy and nutty taste that’s like no other cheese.

“The strong, harmonious aroma and the fruity note of Kaltbach Gruyere is incomparable. The cave refinement also prolongs the flavourful finish and creates the typical crumbly texture. I am sure Kaltbach Gruyere will trigger an enjoyable culinary highlight for customers.”

Find Kaltbach Cave-Aged Gruyere cheese at your local Calgary Co-op store. Ask for it in the Deli department.

Remember when you were a kid, in the middle of a cold Canadian winter, staring at a frozen pole, wanting to lick it, but knowing...

Ah, St. Valentine’s… the day of love. This year, show some love with a fun and family-friendly 14th of February at home.

While it’s nice to have something delicious warming in the oven, making your house smell wonderful, there are plenty of party-worthy nibbles that are happy...