Although it’s pretty tasty on its own, most meat definitely benefits from some extra flavour, but it’s all about getting the balance right. Sure, you can use bottled sauces and packaged seasonings, but sometimes simple flavours are best, particularly when you’re cooking a flavourful meat like Only Alberta Bone-In Chicken Thighs.

This week, whether making it fast, family-friendly or preparing a feast that will hold up for the freezer is your goal, we have some delicious ideas. Make It Tonight!

Lemon is a tried and tested ingredient in many meat dishes, particularly chicken, and it’s not surprising why. The bright, fresh flavour of lemon helps to balance both the richness of dark meat and the fat from the skin. Whether you use the zest, the juice or the whole lemon, this citrus lends an acidity that makes chicken even more delicious.

It’s a common misconception that marinating meat in acidic ingredients, such as lemon, helps to tenderize it. In fact, acidity does nothing to break down the fibers in the meat and actually causes the proteins to denature, making them more firm. Think about when fish is soaked in citrus fruit for ceviche - it actually starts the cooking process, rather than making it softer. That being said, marinating meat in lemon won’t cook it because the fibers are too well protected. So when you’re adding lemon to your chicken, you’re doing so just for that tasty flavour, whether you’re making a sauce to cook it in or putting a whole lemon up the cavity for a roast.

One of the oldest recorded edible plants in the world, garlic is a member of the lily family, like leeks, shallots and spring onions. However, garlic has undeniably the strongest flavour and scent, making it an irresistible addition to almost any dish, especially chicken dishes! Garlic and chicken are a match made in heaven and, personally, we think there’s no such thing as too much!

Our Lemony, Garlicky Chicken Thighs and Potatoes recipe makes the most of both these ingredients in one tasty, zesty dish.

The salty, tangy, even sometimes sweet flavor of parmesan cheese is a winning addition to a number of meat dishes. Parmesan cheese is known in Italian as Parmigiano Reggiano, after the provinces in which it is made: Parma, Reggio Emilia, Modena, Bologna and Mantua. Outside of Italy, you can find both real Parmigiano Reggiano and imitation cheeses, known as Parmesan or Italian Hard Cheese, which have not been aged as long or made from the milk of cows who graze on strictly fresh grass and hay.

Depending on how aged your parmesan is, it may taste sweet and floral or more tangy and spicy.

One of parmesan’s most charming qualities is its crumbly, uber-gratable texture. This makes it the perfect cheese for adding a crust to fried, grilled or baked chicken breasts, such as in the popular Chicken Parmigiana. This classic dish calls for making a sort of schnitzel by battering chicken breasts in whisked egg, parmesan and breadcrumbs before baking in the oven with marinara sauce and mozzarella cheese. Our take on this dish is this Founders & Farmers Parmesan Crusted Alberta Chicken Thighs with Crispy Smashed Potatoes.

Another great ingredient in your meat recipes is the salty, umami richness of soy sauce. Typically associated with Chinese and Japanese dishes, it forms the basis of a number of stir-fry sauces, glazes and marinades that add a whole new depth of flavour to meat.

There are three types of soy sauce: light, dark and all-purpose. The difference between light and all-purpose is very minimal, with the latter having slightly more of a soy flavour. Sichuan dishes such as Kung Pao chicken, often call for the intensity of dark soy sauce while Chow Mein, Fried Rice and stir fries tend to use light soy sauce. We let the soy sauce be the star in this Soy Sauce Alberta Chicken Thighs with Jasmine Rice (or serve it over zucchini noodles for a Keto-friendly dish)

Elevate your dinners with the simple addition of one of our four flavor-enhancing elements for chicken! Whether you’re cooking a whole pan or whipping up a small stir fry, you’ll want to add some depth of taste with these classic ingredients. 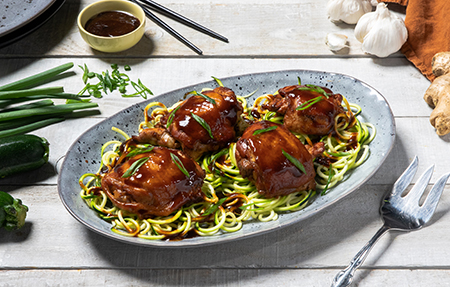 In a large pot with a lid, heat 2 tbsp of oil with garlic and ginger. When the garlic starts to brown add the soy sauce, sugar and wine. Bring to a simmer and stir together.

Now add the chicken thighs skin side down, turn to low and cover with the lid. Let cook for 10 minutes.

Turn the chicken thighs with the skin up, add the lotus (optional) and cover. Cook for another 10 minutes until chicken is cooked through. Remove lid and reduce sauce slightly.

Heat the remaining 2 tbsp of oil in a sauté pan. Add the zucchini noodles, season with salt and pepper and cook until tender.

To plate, place a bed of the zucchini noodles down on the plate and top with the chicken thighs. Garnish with the green onions.

Spring is finally upon us, with summer just around the corner. And that means only one thing: grilling season is here.

Sometimes you just don’t want to deal with all the steps necessary to make a full, healthy dinner.

Now that spring is nearly here, with summer just around the corner, that means that burger season is nearly upon us.

Back to Top
Calgary Co-op Learn Make It Tonight: Bone-In Chicken Thighs
Back to Top