Casseroles are everywhere. There’s goulash, chicken divan, mac and cheese, potato gratin. Not to mention classics like lasagna, strata or tuna and noodle; casseroles are classics. Bet you’ve never stopped to think about these weeknight favourites that have been around for over 120 years. How did a simple one-dish meal, in its many incarnations, become so wildly popular?

The term “casserole” comes from French and was historically in reference to a large, lidded cooking vessel used for both the cooking and serving of a dish. In the early 20th century, the term for the casserole pan, and the pan’s use for cooking food became one and the same and the ubiquitous casserole was born.

While there have been many different pans used for casseroles over the century, perhaps the most famous is CorningWare. Invented in 1953, and available to the public in 1958, CorningWare introduced a level of convenience and durability previously unknown with kitchenware.

This shift to awareness about convenience was notable in the 1950s, as more women joined the workforce. The appeal of having a pan that could perform all of the necessary duties of feeding a family did not go unnoticed.

Those same reason of convenience explain why casseroles and one-dish meals have stood the test of time.

The Campbell Soup Company had been producing canned soups since the late 1800s, and in the 1950s they began distributing recipe pamphlets that used their canned soups as the basis for producing a variety of meals, everything from casseroles to even tomato soup cake!

Casseroles, and many of the other recipes included in these pamphlets, were concerned with producing quick recipes that were economical, and required little preparation or cleanup.

Today, missing together a can of tuna, some Campbell’s cream of mushroom soup, and egg noodles still qualifies as comfort food.

While some of the soups are now familiar standbys, we love the creaminess that Campbell’s Cream of Potato soup adds to this casserole idea that’s fit for a feast: Tater Tot Casserole couldn’t be easier to throw together, and it’s a tasty side, or breakfast casserole.

The casserole has survived many decades, and will surely survive many more. While we might think of the 1950s as being the start of the casserole, that decade really only signifies the time period we most closely associate with dishes that have been around since the late 1800s.

In the first few decades of the 1900s, tuna casserole and lasagna were very popular casserole recipes that were economical and convenient. Our easy Beef Lasagna recipe uses ground beef and an array of cheeses, plus keeps it quick by using a pre-made sauce.

No casserole discussion would be complete without a baked macaroni dish. This Bacon Cheeseburger Macaroni Pasta with Garlic Sour Dough Bread covers all the bases; it’s quick, tasty, can make enough to feed a crowd or to make extra for the freezer, and it’s definitely kid-friendly.

With some ground meats like ground chicken, ground chuck or ground turkey from your local Co-op, some canned soup and a bit of guidance, these casseroles can become weeknight staples, whether you need something fast, or family-friendly. Make it Tonight! 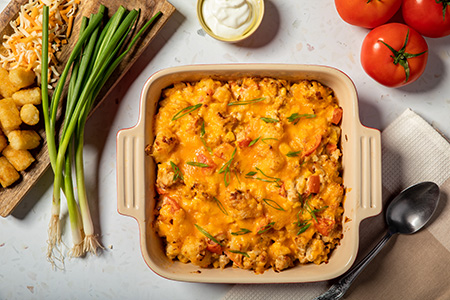 In a large pan heat the oil and then add the meat. Once the meat is browned, add the onions. Cook for 2-3 minutes until tender and then add the garlic powder, chili powder, tabasco and cayenne (optional).

Drain off the extra fat and adjust the seasoning with salt and pepper.

Combine the meat-onion mixture with tater tots, potato soup, corn, sour cream, 1 cup of cheese and tomatoes. Place in a casserole pan and bake for 30-35 minutes until golden brown.

Top with remaining cheese, turn oven to broil and brown the top. Garnish with green onions and enjoy with a green salad.

*** Great for breakfast with a fried egg on top***

Although it’s pretty tasty on its own, most meat definitely benefits from some extra flavour, but it’s all about getting the balance right.

Now that spring is nearly here, with summer just around the corner, that means that burger season is nearly upon us.

There is nothing else quite like bacon. It has that distinctive rich, welcoming aroma when cooked, and that crispy texture and umami flavor when eaten.

Back to Top
Calgary Co-op Learn Make It Tonight: Ground Chuck & Chicken
Back to Top